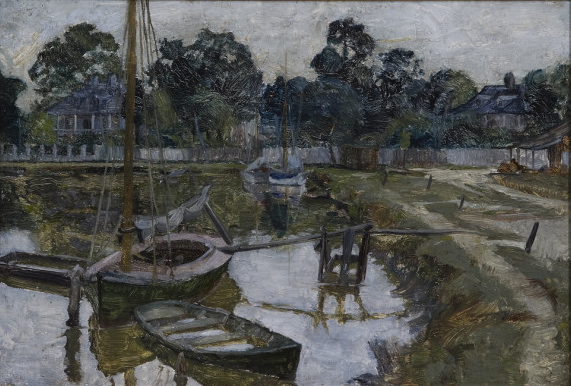 If you’re looking to relax or take a contemplative stroll, this largely residential neighborhood is a great way to spend the day by the gentle waters of the bayou. But just as it’s gentle waters flow through the neighborhood so does the history of the city.

Also called the Faubourg St. John neighborhood, the neighborhood is bounded by Bayou Road/Gentilly Boulevard and Belfort Avenue to the north, Orleans Avenue to the South, as well as North Broad Street to the East. The Bayou St. John creates its Western boundaries.

Native tribes first guided Jean Baptiste Bienville LeMoyne to the Bayou St. John’s waters in 1708, he knew he wanted to find the present day site of New Orleans by these waters. The five mile separation between the Mississippi River and Lake Pontchartrain made transporting materials easy along the bayou. The natives often identified and used this route as the safest and shortest way from the Gulf to the Mississippi River.

Many buildings in the neighborhood were built in the late 1800s up until the early 1900s with many houses along the bayou counted as the oldest remains of the city, dating to the late 1700s and early 1800s. For more than a century the bayou was the main waterway in and out of the city. Originally, the waterway was used as a trade route for the local Native American tribes. In fact, “Bayou” is an adaptation of the Choctaw or Mobilian word “bayuk” or “bayouk”. As European settlers populated the area, many traders, travelers, and residents got their first experience of New Orleans by this stretch of water. It was used as a shortened entryway to Lake Pontchartrain.

In fact, the waterway was part of the lifeblood of the city. In addition to boats —  pulled by horses on either side — being used for travel and commerce, it was also a center for voodoo. Marie Laveau, the famous Voodoo queen, hosted rituals with thousands of practitioners at the Bayou where it was safe from police raids in the early 1800s.

Although neighborhoods were established around the Bayou, the wet environment made it hard to live and construct buildings in. However, by 1857 improved drainage systems and transportation made it more stable for developing neighborhoods. By the 1930s, more houses were built along the bayou. Yet, residents complained about unclean environment due to increased activity. As a result, congress ordered an end to all navigational on the bayou use by 1936.

Several historic homes remain with many late 19th century homes have been built in between these early architectural pieces, creating a peaceful and scenic streetscape. Architecture in the area consists of shotgun singles, raised cottages, and arts & crafts homes with a large number of houses that were originally doubles, but have since been converted to single family homes. Many New Orleans residents boast about the beautiful bayou view and the recreational activities that the waterway provides its visitors.

Today, the bayou is used as a meeting place for downtown Mardi Gras Indian tribes as they prepare their music, song, and dance during the parade’s festivities. The event is called “Super Sunday” and it’s not limited to the Mardi Gras season.

The city wouldn’t exist without its humble beginnings and history in the Faubourg St. John neighborhood. To get to fully experience the decadent history of New Orleans, make sure you schedule an activity or a fun walking tour on your journey throughout the city!