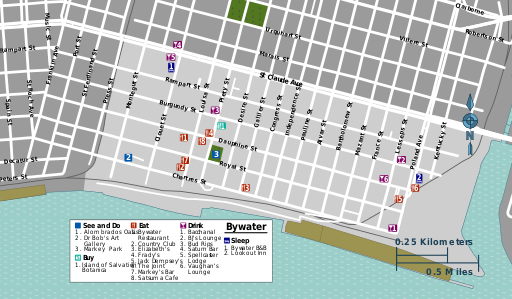 New Orleans is the epitome of culture and ceremony. Each neighborhood has its own intimate history, story, and landmarks. The Bywater subdistrict is another unique area that has served as a significant reminder in NOLA’s history. The neighborhood acts as the starting place for festival krewes during Mardi Gras which gathers a procession of marchers as it makes its way to the French Quarter.

Today its Bywater Historic District is listed National Register of Historic Places. However, many people don’t realize the rich history of each neighborhood. Let’s explore the background of the Bywater:

In the colonial era, the Bywater was the site of a plantation. In the early 1800s, private homes were constructed as part of the “Faubourg Washington” which was part of the Fancophone downtown area. Settlers from Spain, France, and the French Caribbean came to the area seeking religious refuge or new, prosperous ways of life. As the century progressed, white Creoles and mixed-race Creoles lived by immigrants from Germany, Italy, and Ireland.

The Bywater is famous for the location at which Homer Plessy was removed by authorities from an East Louisiana Railroad car for violating the separate car act. The incident led to Plessy v. Ferguson. A historical marker stands at the corners of Press and Royal street to commemorate the events.

The area was also considered the Lower 9th Ward before the Industrial Canal was build in the early 20th century, dividing the two areas. While some generations knew the area as the Upper 9th Ward. However, as other parts of the upper neighborhood developed, a new name was needed. The local telephone exchange designated the area Bywater and it fit the neighborhood’s proximity to the River and the Canal. By the 1940s, it was permanently called Bywater.

With the advent of the nearby 1994 Louisiana World Exposition, many long-time residents from the French Quarter moved down river, first to Marigny. But by the late 1990s, the bohemian communities originally living in the French Quarter had spread to the Bywater. Old Victorian houses were refurbished as artistic residents moved in.

Today, Bywater is known as one of the most colorful neighborhoods in the city with elegant architectural styles that mirror the colonial French and Spanish elements similar to the Caribbean. Now, it stands as a trademark of New Orleans architecture.

During Hurricane Katrina, some areas of the neighborhood were badly damaged by the storm. However, the river side of St. Claude Avenue was one of the few sections of the 9th ward to escape major flooding. It is now one of the areas that has made great strides in recovery.

During NOLA’s Mardi Gras celebrations, the Society of Saint Anne starts their procession in the area. The parade travels through the French Quarter and ends on Canal Street. The parade gathers local residents, artists, and street performers as it moves along the streets. The Bywater Bone Boys Social Aid and Pleasure Club, made up of tattooed artisans, writers, painters, designers, musicians, and many other locals leads the procession before 7 a.m.

The area was a neighborhood where many residents settled in the aftermath of Hurricane Katrina because of its high elevation and that it’s close to the Mississippi River. In NOLA culture, the neighborhood became known as the “Silver by the River” because portions of it saw no flooding, like Faubourg Marigny, the French Quarter, and the Irish Channel.

While you’re in the Bywater, there are several spots and locations you should visit. Adding a mix of cultural prominence and cultural interest, the neighborhood is a relaxed and introspective part of the city. Be sure to check out:

The neighborhood is great for convenience, but it’s also known as a vibrant social scene which sets the stage for the friendly neighborhood feel that New Orleans can offer many of its visitors. It’s a great way to get to know the locals and the everyday lifestyles of New Orleans citizens!