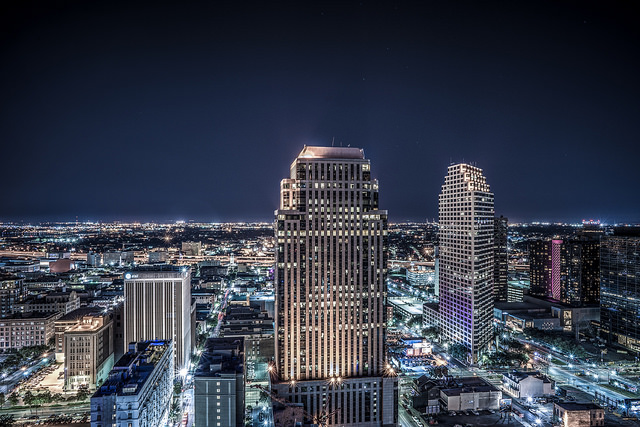 The Central Business District (CBD) is a major center for commerce, economics, and business in its downtown hub of perpetual activity. The neighborhood also acts as the central seat of government in New Orleans. Considered by some to be a subdistrict of the French Quarter, its boundaries are bordered by Iberville, Canal, and Decatur Streets to its north and the Mississippi River to its east. Major sites like the New Orleans Morial Convention Center, Magazine Street, and the Pontchartrain Expressway consolidate its boundaries to the south. In addition, South Claiborne Avenue, Cleveland, and Derbigny Streets shelter its western borders.

The neighborhood was originally developed as a residential hub called Faubourg Ste. Marie or the St. Mary Suburb in the 18th century. It’s plated streets were the first signs of expansion beyond the original French Quarter district. After the Louisiana Purchase in 1803, major investments began developing in the neighborhood as numerous people from the United States flocked to New Orleans giving the district the nickname, “The American Sector”. While Canal Street was the original dividing line between the traditional St. Mary district and the French Quarter, Canal Street is legally considered to be a part of both neighborhoods today. Throughout the 1800s and early 1900s, the Central Business District progressed upon developments without any pause. By the middle of the 1900s, the majority of professional offices in the city were located downtown, distinguishing the neighborhood as a well-developed, central business hub with accessible public transit systems.

Further developments continued into the 1950s-1960s. A six-lane Loyola Avenue was constructed as part of the Elk Place extension, cutting through low-income residential areas and originally housing the city’s new civic center complex. In the late 1960s, Poydras Street was widened to create another six-lane central area circulator for traffic and to accommodate high-rise constructions. From 1973 to 1993, the City of New Orleans underwent renovations with public and private sector to spark more community participation. Today, luxury properties such as FourWindsNOLA and Four Seasons Hotel have helped to bring more development, security, and appeal to the district.

Close to the Mississippi River holds The Warehouse District which was heavily home to many warehouses and manufacturing buildings before the advent of containerized shipping. During the 1984 World’s Fair, the area drew renewed interest in the somewhat derelict district. As a result, heavy redevelopment began in the area. Many of the old warehouses have now been converted to boutique hotels, trendy restaurants, condos, and art galleries. As a local or visitor to New Orleans, the CBD is a must-see spot where much of the action and attractions lie.

Luckily, much of the business district escaped major destruction during Hurricane Katrina as it lies on higher ground. The bustling center, home to the best of art, culture, and everyday business is a great way to preserve the memories of the past and the forward direction that New Orleans has been making the past decade.