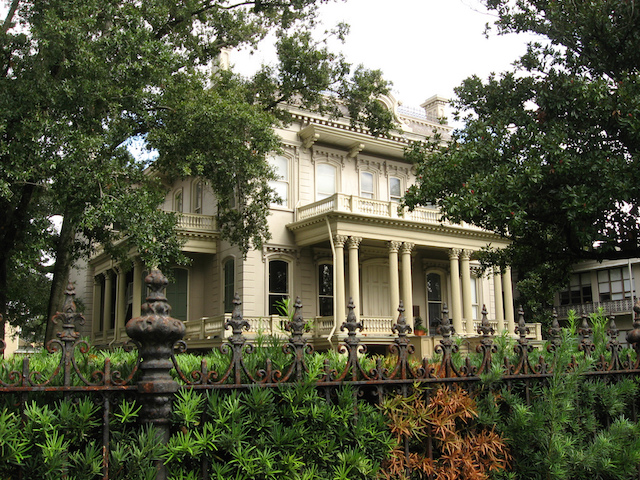 The Garden District is one of the most enchanting and beautiful districts in New Orleans. Characterized by lush gardens, tree-lined streets, and opulent homes, the neighborhood is a popular real estate hotspot for residents and even celebrities like Beyonce and Jay Z. Today, the district is considered one of the best preserved collections of historic mansions in the Southern United States.

As we learn about New Orleans and its history, this spotlight on the Garden District can offer some insight into NOLA’s varied past:

The first land parcels in the Garden District were dotted with large, sprawling plantation homes including the famous Livaudais Plantation. The land was eventually sold off in sections to wealthy proprietors who wanted to live away from the crowds that inhabited the French Quarter. It was first established as part of the city of Lafayette in 1833 and became a part of the city of New Orleans in 1852. Originally designed, planned, and surveyed by architect Barthelemy Lafon, the district saw major development until 1900. Originally, the district was planned with only two houses per block, surrounded by lush gardens, from where it’s famous name derives. As New Orleans became more urbanized the large plots were divided into smaller lots for more construction. Today, visitors will see a couple large, early 19th century mansions sitting next to gingerbread-style Victorian houses on many of the neighborhood’s blocks.

Part of the district is declared a National Historic Landmark in 1974 for its architectural history.

Most visitors and tourists visit the district for it’s architecture beauty rather than its gardens, but both are part of the Garden District’s unique experience. Visitors should check out these historic architectural landmarks while in town:

Adam – Jones House, 2423 Prytania Street
The house was constructed for John I. Adams, a merchant who purchased the section of the former Jacques Francois de Livaudais plantation which later became the Garden District. Adams purchased the property in 1860, built the residence, and lived in it until 1896. Shifting various owners over the next century, it was restored from 1961-1962 by Mrs. Hamilton Polk Jones. It was established as a historical landmark in 1995 by the New Orleans Landmarks Commission.

George Washington Cable House, 1313 8th Street
Located on the Garden District’s west side, the building was built by author George Washington Cable in 1874 after the publication of his short story, Sieur George. It’s also the house where Cable wrote and was influenced by native New Orleans culture.  Mark Twain was a guest here. The single-story structure features a full-height basement and columns that includes an arcade.

Buckner Mansion, 1410 Jackson Ave
Known for its many ghost stories, The Buckner Mansion has reached more popularity since its appearance on the TV series American Horror Story: Coven. Built in 1856, the 20,000 square foot property was owned by cotton king Henry S. Buckner. It also used to be Soule Business College from 1923-1973. But now, it’s a popular destination for tourists, film crews, and vacationers for its beauty and southern charm. Staying at the mansion will cost a pretty penny ($20,000/night) so it’s best to go for a tour.

Brevard-Rice House, 1239 First Street
The beautiful antique mansion was owned by the Brevard heirs from 1859-1869. Later purchased by Emory Clapp, who constructed a library on the left wing, it remained in the Clapp family until 1935. Then it was owned by a slew of other notable people in New Orleans society. Today, it is owned by novelist Anne Rice and her husband. Tourists can take a gander at the stunning columns and architecture as it was created a landmark site in 1991.

Joseph Carroll House, 1315 First Street
After you stop by the Brevard-Rice spot, check out this cast-iron beauty that was built in 1969. The elegant Italianate mansion also played host to Mark Twain in 1886. While here, be sure to check out the carriage house as well.

Walter Grinnan Robinson House, 1415 Third Street
One historical house you need to admire when you stop by the Garden District is the Henry Howard mansion. The 1859 creation features adjacent servant quarters and stables–which underwent a renovation– that offers historical and cultural insight into the antebellum south.

This spotlight on the history and the prominent landmarks in the Garden District can offer you a walking tour that helps any guest appreciate the decadent architecture and the complex history of New Orleans.