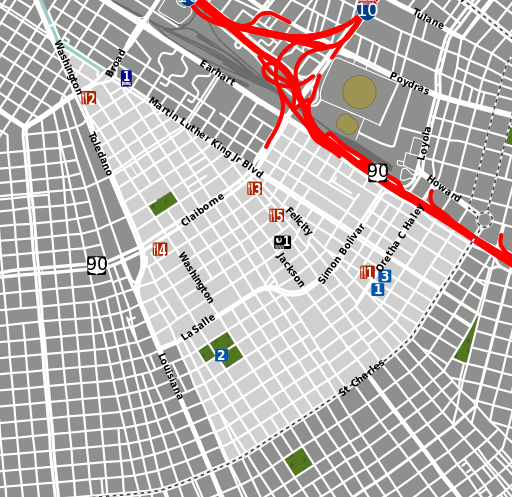 New Orleans’ Central City neighborhood plays an important part in the cultural traditions of the Big Easy. Predominantly an African American community, its history of brass musicianship and Mardi Gras Indian traditions distinguish it from other districts in NOLA.

Located in the lower section of Uptown and above the New Orleans Central Business District, it sits on the lakeside of St. Charles Avenue. It’s boundaries include MLK Boulevard, the Pontchartrain Expressway to the north and other major streets to the south and west.

The neighborhood first developed in the early 1800s near Saint Charles Avenue. The opening of the New Orleans & Carrollton Railway and the New Basin Canal in the lower end helped attract commerce and Irish, Italian, and German immigrants and working class residents to the area. In the 1830s, Dryades Street became a commercial district and in 1849, the Dryades Market was built and served as a communal center point for nearly 100 years. After the American Civil War, many African Americans from rural towns settled in the neighborhood. By the 1870s, the urban area had grown to Claiborne Avenue. During the early 1900s, commercial activity helped make it the largest New Orleans neighborhood patronized by African American residents during the Jim Crow era. It also became a the main hub for the Uptown African American community. During the district’s heydey after WWII, it housed over 200 business.

However, the area started to decline in the late 1960s. Throughout the 1980s the area’s economy slowly declined and depreciation peaked by 1990 with many vacant lots and buildings. However, by the beginning of the 2000s, community projects started to help revitalize the area. After Hurricane Katrina, Central City was recognized for its plot of high, dry ground. Today, post-katrina redevelopment efforts focus on the area and the revitalization of old public housing from the 1940s (during segregation).

The Civil Rights Movement is a significant portion of Central City’s history. In 1957, the Southern Christian Leadership Conference was founded with Martin Luther King in the neighborhood. In addition, a major boycott of Dryades Street occurred to protest segregation in the 1960s. The neighborhood is also where the Congress of Racial Equality was founded.

Central City is a National Register Historic District and is home to several landmarked buildings. Here are some neighborhood businesses and sights to check out:

Central City offers an exceptional opportunity to be surrounded by profound civil rights history. Acknowledging the impact the neighborhood has had on Southern and national history makes it a noteworthy addition to New Orleans.